Compatible with Arduino Uno, basically any Arduino-pinout-shaped Arduino as only the GND and 5V pins are used. You can stack other shields on top, or stack the Power Shield on top. The Arduino Power Shield has the ICSP headers, so your can stack shield uses ICSP for data transfer (like the Ethernet Shield)!

The Arduino Power Shield is equipped with a 2000mah Lithium Polymer battery (3.7/4.2V kind). Plug in the battery and recharge it via the microUSB jack. A 5v wall adapter, like any adapter to charge your phone, is recommended to charge the 2000mah Lithium Polymer battery because the charge current is up to 1000mA. There’s an onboard fuse to protect against higher current draws which could damage the charger. The battery has overvoltage, undervoltage, overcurrent, short circuit protection

The onboard boost converter can provide at least 500mA current, and can peak at 1A. The output of the Boost shield is fed directly into the 5V pin on the Arduino, with a protection TVS. There’s a switch, it will let you turn the Arduino Power Shield on/off.

• 5V Output and Breakout Header for non-shield use

This section takes the 3-4VDC in from the LiPoly battery and boosts it up to 5V DC. This section includes the control chip, inductor, some resistors, diode, output capacitor and TVS.

There’s also a TVS on the output, which will fuse when the output is higher than 6v, to protect the stack arduino.

There is a power switch in DC/DC boost section. You can turn the booster on/off whenever you like.

In DC/DC boost section, there is one LED(green) lets you know whether the booster is running or not.

There is still a 5V Output Breakout Header for non-shield use.

There’s two LEDs next to the microUSB jack which will tell you how charging is going. If the CHG LED is on (yellow) that means its charging. the DONE LED (green) turns on when the battery is full.

There are no reviews yet.

Get the new products 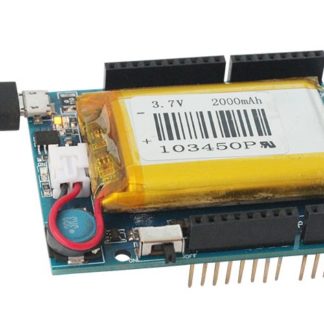